It’s not unusual for people to contact me when their beloved animal companion is in the last stages of life.  Many times, it’s days or hours away.  Knowing at what point the suffering is greater than the quality of life can be difficult.  I’m grateful I can help with this decision.  It’s important to understand how your animal feels and what they need. 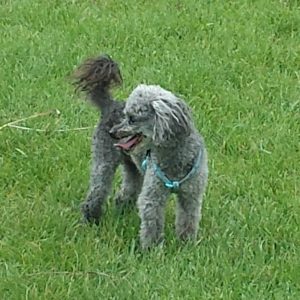 I trust all happens in perfect timing, yet sometimes I wish people would contact me sooner.   Following conventional advice is not always in the best interest of your beloved animals.  While there certainly is a place for allopathic medicine, many times, especially with more chronic conditions, there are holistic alternatives that can do more benefit with less harm.  It’s best to start before the problem appears…or shortly after if necessary.

Here’s a story from my own recent experience.  About nine months ago, my toy poodle King began showing signs of discomfort on his front leg after running down the deck stairs.  I gave him a day or so and it improved so I let it go.   After another month, he began limping again.  This time it persisted a few days…on a weekend of course…so I took him to the emergency hospital in Appleton.  As they examined him they found nothing broken and determined the pain was coming from his shoulder (I knew this part).  Even though I knew his shoulder was sore, I wasn’t going to rely only on my abilities to diagnose him.  I was glad to find out nothing else was a problem.  I gave him ZeoComplete to reduce inflammation and a supplement with joint support and a natural anti-inflammatory.  I also took him to my vet for a chiropractic adjustment.

A few weeks later, he was sore again.  I sensed something more was going on and took him to my vet asking for x-rays.  The x-ray revealed a tumor on his shoulder bone.  The diagnosis was osteosarcoma, or bone cancer.  My vet explained the “normal course” (and he knows I rarely follow the normal course) is to amputate the leg and shoulder and use chemotherapy.  This should provide 6-12 months more life.  I knew this would not be a good option for King.  He suggested a few different pain relievers.  He held the most hope for one that could be compounded for King’s tiny size and seemed to have less negative effects than the other ones.  Because it would take at least a week to get, he recommended Tramadol and Metacam in the meantime.  I wasn’t comfortable giving these harsh drugs to King but I also knew he was in pain.  I decided to try a dose of the tramadol. Afterwards, he seemed worse.  I also tried the Metacam. Again this was doing more harm than good.  King was acting like he wanted to die right then.  I could tell he had lost his zest for life.  I was heartbroken that he might have only a very short time to live.  When my vet ordered the drug I was waiting for, he told me he was ordering enough for one month, more than I would need.

A friend and I did energy work with King.  I stopped the other two pain relievers.  He perked up.  It occurred to me that marijuana is being used successfully to treat pain with cancer so maybe I could find marijuana for dogs.  Well I found something even better.  I found a cannabis product called Canna-Pet, developed after years of research by veterinarians.  This product has no THC, the component that causes hallucinogenic effects so it can be shipped anywhere in the US.  It’s useful for end of life comfort and many other physical and emotional (behavioral) issues. I ordered it right away.

When the anti-inflammatory drug that was being compounded, arrived I was hesitant to start King on it because I knew it could cause gastric ulcers.  I had just started him on the Canna-Pet and decided to give it a few days.  King’s attitude and appetite improved.  He had less pain and was not three-legged lame but was still sore.  After another week or two King continued to improve but still had pain so I decided to add the anti-inflammatory drug after testing it for him by dowsing.  After I added this with the Canna-Pet, King stopped favoring the leg.  He would occasionally yelp if he overexerted himself but overall was enjoying life.  After another month on these products, he was no longer yelping.  He was begging for petting again and running up and down the deck stairs.  When he started to have digestive issues, I put him on an herbal digestive aid designed for dogs and reduced the anti-inflammatory to once a day.  That was about 5 months ago.

I tell you this story because had I followed the typical advice, I’m certain King would have declined and been gone within a month as my vet suggested.  The side effects from the drugs would have caused so many other issues, he wouldn’t be enjoying the health he is now.

Using drugs like prednisone have their place in acute situations but they are very problematic when given for long periods.  Allopathic medicine can do miracles in acute situations.  My dog Tiger had surgery for a herniated disc in his neck at UW Madison Vet Hospital and it saved him from intense pain.  I’m not against all allopathic medicine, but there is so much that is not necessary and even harmful. Over vaccination, unnecessary drugs and commercial diets are creating many of the health and behavioral issues seen in our companion animals today.  Allopathic medicine fails at creating homeostasis which means balance. The body is designed to heal itself.  When we support it with proper diet, exercise and play, reduce toxins and stress the body can heal.

My journey with holistic help for animals began in 1996 with my dog Tiger.  This was when I began feeding a homemade and then raw diet to my dogs.  I learned about the problems of over-vaccination and harsh drugs given routinely (and often unnecessarily).  My sensitive dog Tiger taught me much as did my horses.  For those of you who have known me since I began working with animals in 2002, you know I also used to do complete wellness workups for animals including essential oil therapy, cranio sacral therapy and nutritional recommendations.  While this work is no longer included on my website and I’m not doing full work-ups anymore, I am here to help steer you in the right direction (along with your holistic veterinarian) when your animals are facing health issues or while they are healthy to ensure they stay that way as long as possible.

If your animals are struggling with health issues (or you want to prevent the issues), please contact me (wendy@wendywolfe.com).  Also consider a second opinion with a truly holistic veterinarian.  If you don’t have one near you, some will do consults from a distance.  They need you to be their advocates.  Many times, much can still be done to improve their quality of life and often you will save money too.